On October 2, 2014 the Republic of Srpska Ministry of the Interior Women Network – RS WPON and the Ministry of Human Rights and Refugees of Bosnia and Herzegovina signed a project “Prevention of Online Violence as a Form of Protecting Girls from Sexual Exploitation”.

The project “Prevention of Online Violence as a Form of Protecting Girls from Sexual Exploitation” was implemented from October 1, 2014 to June 30, 2015 at the territory under the Republic of Srpska Ministry of the Interior jurisdiction.

In accordance with the Project, authors were selected to draft a brochure for elementary schoolgirls on protection from online exploitation; the brochure was prepared and printed; entry and exit tests were developed for schoolgirls who attended the education; trainers – educators were selected to hold classes/lectures in elementary schools; lectures were held in 10 elementary schools in Banja Luka and Prijedor. When the educations were completed, the project was analyzed, i.e. a qualitative and quantitative analysis of the entry and exit surveys was carried out and a final evaluation of the project with recommendations was provided.

A small number of criminal offenses related to the abuse of minors through the Internet and social networks was recorded in the RS MoI. Also, there has been an increase in number of reports of various forms of abuse of minors through social networks, especially girls with an emphasis on sexual abuse by known or unknown persons. Practice, public opinion, and information from both the media and educational institutions point out to an enormous social problem regarding the abuse of elementary school age girls through information and communication technologies. Legal regulation does not sufficiently regulate this area and prevention, in the sense of direct work with the elementary school population, is almost non-existent.

Qualitative analysis of the reported cases in the RS MoI revealed that, in majority of reported cases, the victims were underage girls. Further analysis and informative conversations with them lead to the conclusion that the victims did not realize the risks they were exposed to when posting the photos and content on social networks, given the speed at which information is spread on the Internet.

It all points out to the fact that elementary schoolgirls contribute to their own victimization by exploiting their inappropriate social media photos. The aforementioned is supported by the Facebook page “Elementary and High School Sluts”, which provoked a violent public reaction, but also caused trauma in the girls whose photos were published on that page and in their families. Accordingly, it can be stated that the human security of this risk group is at a very low level and that projects of this kind are needed since they can result in an increase in human security and in raising awareness among girls about the dangers of having their personal data manipulated on social networks and them potentially becoming victims of trafficking for sexual exploitation.

The target group are elementary schoolgirls.

The lectures were followed by discussions in which the participants had the opportunity to share their experiences with online abuse and to ask the lecturers about anything that might be of interest to them in this field.

All participants were distributed brochures on “Protecting Girls from Online Exploitation”, which were developed within the project for these educations.

Before the lectures, the students were given entry surveys to complete, and after the education was completed most of them completed exit surveys, i.e. education evaluation questionnaires, which are an integral part of the overall evaluation of all training courses and the project as a whole. Two types of surveys were created – entry and exit.

The entry survey was completed by 228 girls attending the lectures.

All the girls surveyed have an open profile on Facebook (64% over half a year, 14% between half a year and a year and 22% over a year) although they are about 10 years old and Facebook forbids opening a profile if you are under 14;

About 20% of girls surveyed do not know all the people they have as “friends” on Facebook;

99% of the girls surveyed said their parents knew they had open profile on Facebook;

About 7% of girls surveyed said they did not know there were dangers on Facebook;

About 11% of girls found out about the dangers of Facebook when their girlfriends told them that something unpleasant had happened to them;

About 10% of girls surveyed experienced some kind of discomfort on Facebook and received a message that scared them;

About 93% of girls said they did not know what the terms SEXTING and GROOMING meant;

99% of the girls surveyed said that the lecture helped them understand that Facebook had its downsides and would be more cautious in the future;

95% of the students surveyed learned what SEXTING and GROOMING meant;

When asked how much the lecture on Privacy helped, in terms of limiting the visibility of their photos, 72% said it helped them a lot, 27% stated that it was of help, and about 1 % that it didn’t help them at all;

In the future 97% of girls will only accept friends they know personally;

97% of girls surveyed said they would not accept a date with a stranger they met via Facebook;

96% of the girls surveyed said they would report inconvenience if they happened to them via Facebook (parents, girlfriends, and teachers) and 4% said they would not report and would solve the problem themselves;

93.42% of those surveyed knew that there were dangers on the Internet, the most of them said that they were alerted to the dangers by their parents;

It is important to note that the girls realized that the username and password should not be given to everyone. Only 2.55% said they would give it to friends on Facebook or classmates;

Considering the girls’ answers and the fact that only 1.26% of the girls said that the lecture did not help them to understand the downsides of Facebook, it can be concluded that the goal of the lecture was fully accomplished;

93.28% of girls surveyed gave an excellent mark to the lecturers and the lecture itself which emphasizes the good quality of the education;

Considering the results of the exit survey and the accomplished goals, we can make a conclusion that the project objective was fully realized and that it is necessary to continue educating the target group on protection against exploitation on the Internet in order to prevent violence through the Internet and sexual abuse of minors!!! 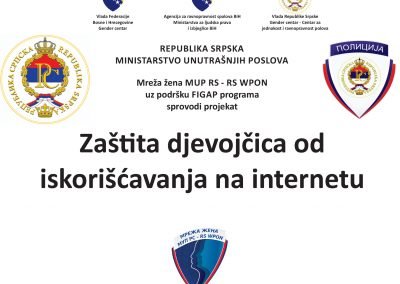 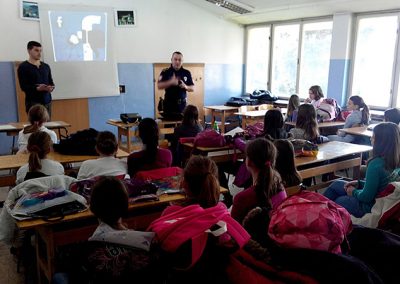 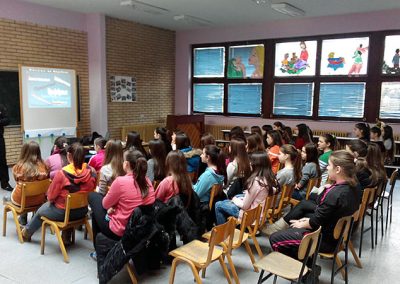 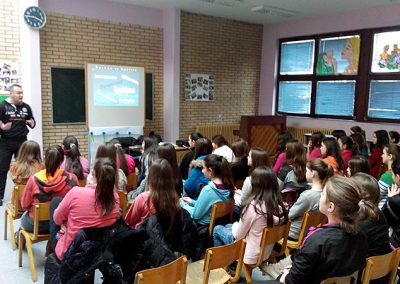 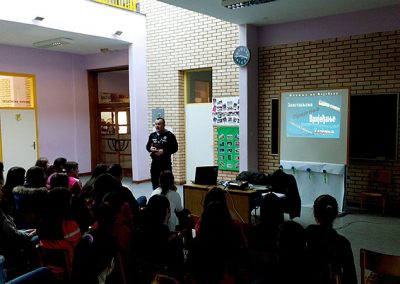