PREVENTION OF ONLINE SEXUAL VIOLENCE AGAINST GIRLS IN SUBURBAN AREAS

On August 26, 2015 the Association “RS MoI Women Network – RS WPON” and the City of Banja Luka signed a project “Prevention of Online Sexual Violence Against Girls in Suburban Areas”.

The project “Prevention of Online Sexual Violence Against Girls in Suburban Areas” at the territory of the City of Banja Luka was implemented from September 1, 2015 to December 31, 2015.

In accordance with the Project, authors were selected to develop a brochure for elementary school students on prevention of online sexual violence; the brochure was prepared and printed; entry and exit tests were developed for female students who attended the education; trainers – educators were selected to hold classes/lectures in elementary schools; lectures were held in 6 suburban elementary schools at the territory of Banja Luka. When the educations were completed, the project was analyzed, i.e. a qualitative and quantitative analysis of the entry and exit survey test was carried out and a final evaluation of the project was provided.

Nowadays, online violence for children in general and girls in particular is a normal form of communication and they do not even recognize it as cyberbullying, which contributes to their own victimization. Unfortunately, the education system does not address this issue yet, and does not include prevention of online abuse in particular. In most cases, children are more computer literate than their parents, and very often more than their teachers and educators, especially in suburban areas. Due to lack of prevention, this issue is mainly dealt with by the police authorities at a time when the consequence has already appeared for a child or when it is necessary to act repressively towards the perpetrators of the violence. Police practice has shown that in large number of cases parents report an event only when threats or requests to intimate contact by an unknown person are sent to underage girls through a social network. Up to that point, most often a girl has already suffered some kind of trauma.

The target group consists of elementary school girls in the suburban areas of the City of Banja Luka. The target group was selected by analyzing surveys conducted in previous similar projects.

The project has helped raise awareness among elementary school girls from Banja Luka suburbs to understand the potential dangers on Facebook social network if it is used without caution. As many as 93% of girls surveyed have an open profile on this social network, so that is why this type of prevention is extremely important, especially given the fact that girls, by finishing elementary school, will enroll a high school and will move from suburban to urban area where they will be away from their parents and thus exposed to greater possibility for online exploitation.

This form of direct preventive work with minors and juveniles through educations/trainings/workshops is very important and irreplaceable in the prevention of socially unacceptable behavior of young people. In addition to the fact that the educations have been positively evaluated by the beneficiaries themselves, i.e. elementary school girls, they were also evaluated very positively by the management of the schools where they took place with the note that it is necessary to maintain continuity of such preventive work with the following generations. 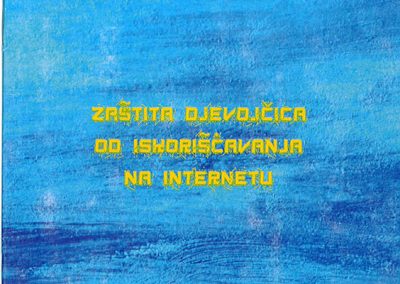